« Previous Next »
Malik Abdul-Haqq, 18, a recent graduate from Cleveland High School, is black on his father's side and Cambodian and Thai on his mother's side. He is also Muslim. Questions about his heritage, name or appearance don't bother him-he sees them as an opportunity to have more conversations about race and religion. "Growing up being mixed is honestly a blessing,"

Malik is six feet, six inches tall, though his Cambodian and Thai mother is all of 4'11." He gets his height from his 6'5" father. His lanky build helped him play football and basketball in high school, and he'll play football in college. "At the end of the day, I look black or African American," he says. Because of his appearance, Malik has had conversations with his parents about dealing with police.

But he feels like he fits in on both sides of his family equally, and takes everything in stride. "I try to stay positive, keep moving forward." Lindsey Wasson/The Seattle Times
© Lindsey Wasson| Seattle Freelance Photographer 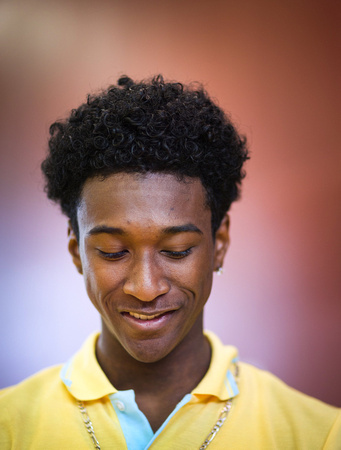