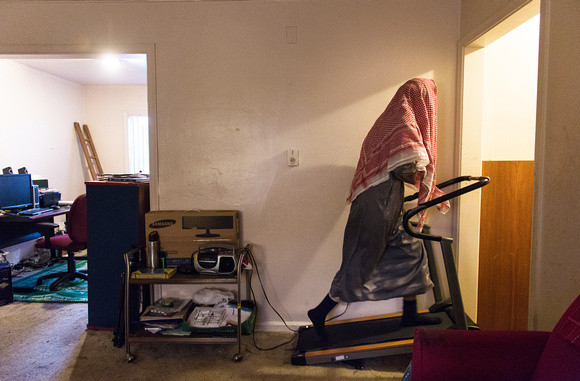 Omar’s long keffiyeh shrouds his face as he briefly jogs on a manually operated treadmill in between finishing his classwork and eating dinner with his father. Unlike his father, Omar has always chosen to wear traditional Arab clothing, which usually consists of at least a keffiyeh (head covering), thobe (long robe) and sandals.

“I like to wear the traditional dress because I like the way it looks. I’ve always worn it since I was a kid; I liked it better. I liked how the culture dressed. I wanted to look like them, so I started wearing it. I started wearing because of the way it looked but also because the prophet of Islam, Muhammad, used to dress like this, so I wanted to dress like that too.”

Gurey says Omar has always had the option to wear whatever he wants, but prefers to dress “like his great-great grandfather.” Omar wants to keep wearing his traditional dress in the future.
© Lindsey Wasson| Seattle Freelance Photographer
Powered by ZENFOLIO User Agreement
Cancel
Continue